With Gift to U of T, Sunnybrook Anesthesiologists Invest in Improving Post-Surgery Brain Health 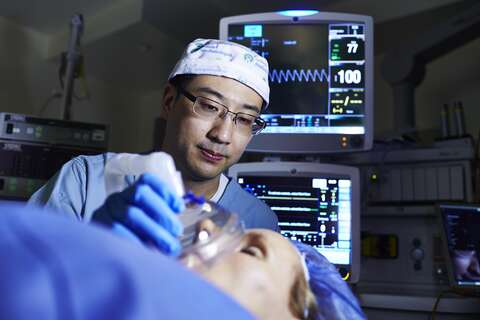 What often follows a major operation is grogginess, confusion, tiredness and forgetfulness. We typically view these as the temporary side effects of anesthesia. But this is just an assumption, since little research has actually been conducted on the causes of cognitive dysfunction after surgery.

Now, a major donation from anesthesiologists at Sunnybrook Health Sciences Centre is empowering the University of Toronto’s Faculty of Medicine to get some real answers about post-operative cognitive dysfunction.

The Sunnybrook Anesthesia Academic Partnership recently established a Professorship in Perioperative Sciences with a gift of $500,000 to U of T Medicine’s Department of Anesthesia. The donor group is a practice plan, which is a group of anesthesiologists who pool money to invest in education and research in a specific area of medicine.

“Right now, there are huge gaps in the science on cognitive function after surgery,” says Professor Stephen Choi, who will hold the professorship and serves as Director of Clinical Research in the Department of Anesthesia at Sunnybrook. “This gift affords me dedicated time and resources to explore this important issue in depth.”

Each year, more than 312 million patients worldwide undergo surgery with anesthesia. About 30 per cent of adult patients experience short-term cognitive impairment, but for approximately 10 per cent of patients, it can persist for months afterwards. These cognitive deficits are associated with a lower quality of life, reduced independence, prolonged hospital stays and increased mortality. As well, there are no existing preventative or treatment strategies for post-operative cognitive dysfunction.

Historically, this issue hasn’t received much attention as, understandably, physicians have prioritized survival as the most important outcome of surgery. But as medicine has become increasingly sophisticated and surgical survival rates have climbed, the time is ripe to address other serious ramifications of surgery.

“We have moved beyond the survival benchmark for surgery, and we’re at a point where we can and should focus more on restoring patients’ mental capacities to their pre-illness state,” says Professor Beverley Orser, Chair of U of T Medicine’s Department of Anesthesia. “This professorship promotes the perioperative domain as a really valuable research opportunity. We can now look for mitigating factors related to post-operative cognitive deficits, and determine how to address them.”

Choi is currently pursuing several studies to identify the main causes of and solutions to cognitive dysfunction following surgery. One involves examining the occurrence of common post-operative delirium and cognitive dysfunction in 600 older patients who have had either hip or knee replacements. He will also identify risk factors such as pre-existing mild cognitive impairment, inflammatory states and post-operative complications. Finally, he will develop a testing procedure to evaluate potential interventions. The study’s relevance is underscored by the large and growing number of joint surgeries performed in Canada: 125,000 knee and hip replacements combined occur each year, and that number is expected to rise in the coming years.

Another of his studies is focused on cardiac surgery patients, 60 per cent of whom experience cognitive dysfunction three weeks after their procedure, and 30 per cent six months later.

Anesthetic medication and the trauma of cardiopulmonary bypass have traditionally been considered the main culprits, but recent studies shows inflammation from surgery and the coronary artery disease itself also play a role. Choi wants to determine whether a sedative called dexmedetomidine, which has been shown to reduce delirium in intensive care patients and to reverse memory deficits in mice models, might help in prevention.

“These will be the most robust studies on post-operative cognitive dysfunction, and will provide an accurate picture of what cognitive delay is like after two fairly major types of surgeries,” Choi says. “I hope to advance the state of knowledge in perioperative medicine by speeding up discoveries.”

Nicole Mfoafo-M’Carthy, a second-year medical student at the University of Toronto, is one of 11 Canadians selected this year to receive a Rhodes Scholarship — one of the most prestigious awards in the world.