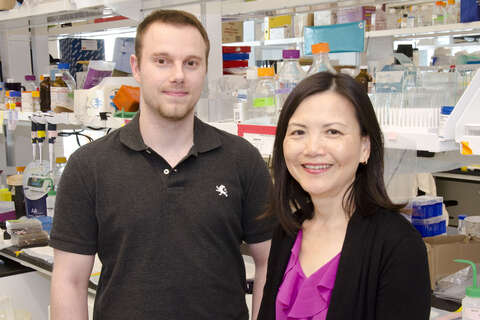 For years there was little hope for children diagnosed with rhabdoid brain tumours. Infants with the rare disease would undergo surgery, chemotherapy and sometimes radiation, but these treatments had toxic side effects and often failed. Now researchers from the University of Toronto have discovered how to categorize these tumours, allowing for a more targeted treatment of this deadly disease.

In a recent study in The Lancet Oncology, Professor Annie Huang and PhD candidate Jonathon Torchia from the University of Toronto’s Department of Laboratory Medicine and Pathobiology, identified three categories of patients with rhabdoid brain tumours. They also studied the effectiveness of surgery, chemotherapy and radiation on this disease. Their research shows that one group of patients can be effectively treated with surgery and chemotherapy, while the other two have a lower survival rate.

“Until 15 years ago, these tumours were considered to be untreatable and almost universally fatal. Now we can identify children who have an increased chance of survival and who would benefit from surgery and chemotherapy,” said Huang, a neuro-oncologist and senior scientist at The Hospital for Sick Children (SickKids).

“Our research shows us that current, highly punishing and intensive therapy is not effective in this third group of patients, and they urgently need new types of therapeutics to change their low survival rates,” said Huang. “For all groups, we believe that there is no benefit in giving radiation. Radiation can have devastating effects, especially in this disease where the majority of children are very young.”

Usually diagnosed in children under two to three years old, these fast-growing brain tumours are often found in the cerebrum and the cerebellum — both of which are critical for normal intellectual and physical development. While doctors in other countries sometimes treat patients older than three years with brain and spine radiation, Canadian doctors have been hesitant to do the same because of its toxic side effects. They’ve been investigating how to treat brain tumours without using radiation, particularly in younger children.

Sylvie Boucher, the mother of a child treated for a rhabdoid tumour, is thankful that her son avoided radiation. “My son is going to be 10. Because he avoided radiation, he’s in the fourth grade in a bilingual school and he’s doing very well. I’m very thankful to Dr. Huang and the team at SickKids.”

Since these tumours are rare, Huang started a global collaborative network to collect enough samples for her study. She began this process in 2001 when she was a post-doctoral fellow, and it has grown into a network called the Rare Brain Tumour Consortium, which has recently launched a web-based registry.

With the help of the consortium, she and her team analyzed the genetic makeup of 259 tumour samples from 37 international institutions — the largest study conducted in this field. “We’ve had tumours and tumour cells sent to us from Budapest, Israel, Pakistan, Thailand, Australia, Hong Kong and many other far-flung countries — it’s amazing what we can achieve together with such global reach and collaboration,” said Huang.

The team next plans to develop a trial to test new drugs and ways of delivering therapy. One promising treatment is to offer patients long-term maintenance chemotherapy, and to use chemotherapy delivered directly to the brain and spine to prevent relapse.

“This study allows clinicians to immediately make more informed treatment decisions,” said Torchia, who was first author of the study. “We now know we need a more targeted approach for patients with low survival rates.”

Huang added, “I’m hoping this will create a paradigm shift in the way we approach childhood brain tumours. It will make us look at malignant brain tumours, particularly those affecting very young children, as a medically treatable disease for which radiation is not always necessary.”

Larry and Judy Tanenbaum and the Tanenbaum Family Foundation’s generous investment will lead to advances in the science and medicine of sport, improving health care for high-performance athletes in the Greater Toronto Area and beyond.