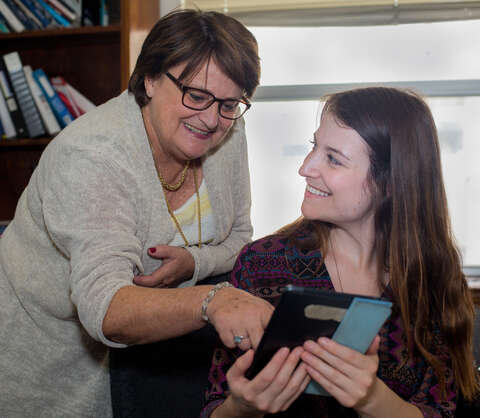 When U of T Professor Mary L’Abbé was asked by documentary makers to help develop a mobile app that would teach people about the potential dangers of excess sugar consumption, she knew it was a sweet opportunity.

“The goal of my research is to help improve the health of Canadians, and what better way is there to get important health information literally into the hands of the people we’re trying to reach?”

One Sweet App is the first mobile application that identifies the ‘free sugar’ content in food products - sugars that are not listed on Nutrition Facts tables.

Free sugar includes all sugar except what’s naturally found in whole fruit, whole vegetables and unsweetened dairy. Think of ‘added sugar’ plus a bunch of stuff you didn’t know you were supposed to be worried about: fruit juices (even 100% fruit juice), purees, concentrates, honey, and all syrups.

The app is being launched as part of the documentary film, Sugar Coated, which has its TV debut May 27 on TVOntario.

“Right now, nutrition labels tell us about total sugars but recent guidelines from the World Health Organization have shown that most health dangers actually come from free sugars,” says L’Abbé.

There is currently no information available to Canadians on the amount of free sugars in packaged foods, something L’Abbé and the producers of Sugar Coated hope to change. The documentary exposes an industry believed to responsible for skyrocketing rates of obesity, diabetes and heart disease. The film recently sold out all four screenings at the Hot Docs film festival.

L’Abbé, the Earle W. McHenry Professor and Chair of the Department of Nutritional Sciences, is known for her research around Canada’s food and nutrition policies. Her background includes roles as Chair of the Canadian Sodium Working Group, Co-Chair of the Canadian Trans Fat Task Force and advisory positions with Health Canada, the World Health Organization and the Heart and Stroke Foundation.

After learning about L’Abbé’s extensive research on Canada’s food and nutrition policy, the documentary’s producers asked about using her food database and research as the engine driving a new mobile app.

“They knew they wanted their app to be based on credible data grounded in good science, and that’s why they approached U of T’s Department of Nutritional Sciences,” L’Abbé said.

According to the World Health Organization, we should limit our free sugar intake to less than 10 per cent of our daily energy intake — and under five per cent is even better. That’s a feat many people will find challenging, considering a single can of pop will put you over your recommended daily intake.

“The app helps users be aware of sugars and where they are found,” says L’Abbé. “And it allows consumers to identify foods that are high in free sugar, which I absolutely believe will translate in to an increased awareness of sugar and its health-related issues,” says L’Abbé.

Soon, L’Abbé, working with her PhD graduate student Jodi Bernstein, hope to expand the app to include a consumer research component.

“Because we’re scientists and health researchers, we want to know whether this actually helps Canadians make informed decisions about their diet,” says L’Abbé.

They plan to introduce a brief questionnaire that will include questions that gauge whether people really understand sugar. Through a soon-to-be-added function that tracks a user’s daily sugar intake, researchers will be able to measure how useful the app is and whether people are using it to make healthy decisions that change their diets.

“This is a platform that allows us to do research on a scale that is appropriate to the tool,” says L’Abbé. “And although not as intensive as the regular research we do at U of T, the platform allows for very broad distribution,” says L’Abbé.

L’Abbé says that working with the app’s developers was one of the most interesting and untraditional research opportunities she has ever had.

“As app developers they’re able to tell a scientific message in pictures that don’t require a lot of text,” says L’Abbé. “As scientists we can write you all kinds of paragraphs and supporting evidence — but an infographic or visual representation can be so much more effective.”

The app is available free of charge from the Sugar Coated website and through iTunes.

Best Evidence Shows Nuts do not Increase Body Weight: U of T Study

Researchers at the University of Toronto have found that nuts do not contribute to weight gain, in the most comprehensive review to date of quality research on links among nuts, fat consumption and body weight.

For the second year in a row, we start our academic year amid a global pandemic. We find ourselves welcoming new students through screens as many orientations are occurring online. Some in-person classes will soon begin, while other courses will be delivered virtually. Thanks to high vaccinations rates, careful precautions – including improved classroom ventilation – and diligent planning, in-person learning is possible once again. Unfortunately, COVID 19 still impacts our ability to do so fully.