Two faculty members associated with the Faculty of Medicine have been named University Professors, U of T’s highest honour for academic excellence.

Andres Lozano of the Department of Surgery and Molly Shoichet of the Institute of Biomaterials and Biomedical Engineering join five fellow University Professors from the Faculty of Medicine — Tirone David, David Jenkins, Tak Mak, Michael Sefton and Peter St George-Hyslop.

Only two percent of tenured U of T faculty members become University Professors.

Lozano was recognized for his contributions to neurosurgery research and treatments for brain disorders, as well as his commitment to education. He is the first neurosurgeon to receive the distinction.

“It’s really quite an honour, especially when you look at the achievements of the other University Professors,” says Lozano, who holds the Dan Family Chair in Neurosurgery at U of T. “We publish and collaborate with researchers around the world, but to be recognized by your home university is a particularly meaningful distinction.”

Lozano has done groundbreaking work to identify and map new brain areas and circuits that play a role in neurological diseases. He has also pioneered deep brain stimulation, a technique that delivers electrical impulses to the brain, for Parkinson’s disease, depression and Alzheimer’s disease.

“We are thrilled that Dr. Lozano has been recognized for his tremendous contributions to brain science. Patients with neurological diseases who have not responded to conventional treatments have been given new hope thanks to the discoveries and innovations of Dr. Lozano and his lab,” says Catharine Whiteside, Dean of the Faculty of Medicine and Vice-Provost, Relations with Health Care Institutions.

Lozano’s experimental trials of patients with Parkinson’s disease and depression have resulted in dramatic improvements for some patients, although deep brain stimulation is not yet a widely available therapy. “We often take patients who have run out of options, and I always admire their courage to embark on a new treatment without knowing what the outcome will be,” says Lozano, the R.R. Tasker Chair in Functional Neurosurgery at University Health Network.

Lozano credits his collaborators around the world for his success, but especially those in Toronto. “Many people at U of T can work anywhere in the world, but we choose Toronto because it offers access to spectacular colleagues and students, and because the Canadian health care system is set up to treat patients in way that enables research,” says Lozano. “For me, the planets have aligned on those three counts in Toronto.”

Shoichet, also a Professor of Chemistry, and Chemical Engineering and Applied Chemistry, leads a diverse team of researchers who are tackling several medical challenges, including cancer and blindness. Her lab is developing new ways to deliver drugs that target only cancerous tissues, leaving the healthy ones intact. Her lab is also bringing regenerative medicine for many debilitating conditions closer to the clinic.

“I have always thought that we, in academia, should focus on answering big questions and solving difficult problems,” says Shoichet. “I like to think of our research as the interface of applied chemistry and applied biology. Ultimately, we aim to enhance tissue repair and functional recovery in diseases associated with stroke, spinal cord injury, blindness and breast cancer.”

“We are also pleased to see Professor Shoichet recognized for her groundbreaking research in polymers for drug delivery and tissue regeneration,” says Whiteside. “Her pioneering translational research has enabled the development of new treatments for previously incurable disorders.” 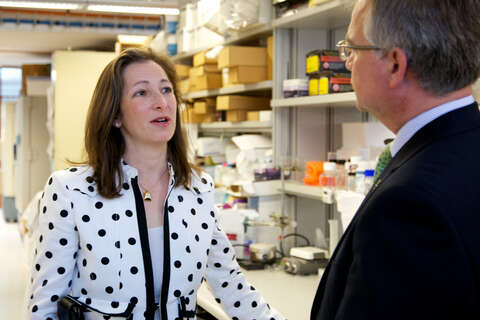 U of T Study Finds Iron Deficiency Affects Half of Pregnancies, yet Many Women Aren’t Screened

One in two women in Ontario have low iron levels during pregnancy, but more than one-third of pregnant women are not tested for iron deficiency, University of Toronto researchers have found.

Montenegro-Burke is one of seven scientists in the Temerty Faculty of Medicine who will receive U of T Connaught Awards, which foster excellence in research and innovation through support for new faculty members who are launching their careers.